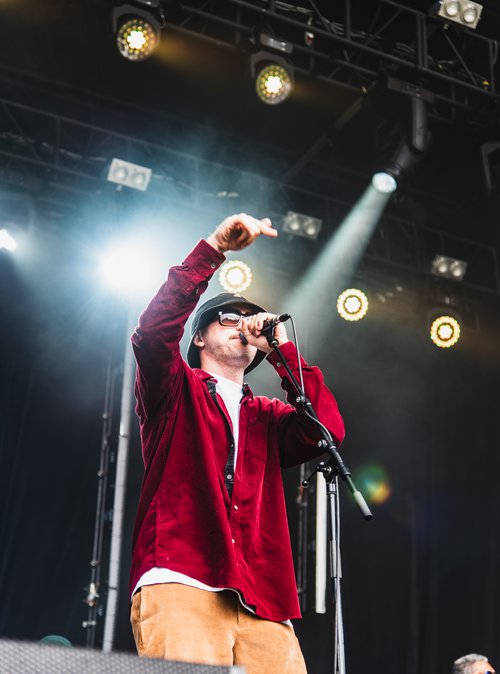 Joined by some of the country’s top musicians, Scott’s “turn-on-a-pin rhythmic cadence” (Metromag) and his “brutally honest, startlingly raw” lyrics (NZ Herald) promise one of the best nights of live music you’ll experience this year.

In 2019, his first album under the moniker Avantdale Bowling Club saw Scott win the Taite Music Prize, Album of the Year and Hip-hop Artist awards at the New Zealand Music Awards, as well as being named a finalist at the Silver Scrolls for the song Years Gone By.

Influenced by the likes of Miles Davis, John Coltrane, Pharoah Sanders and Alice Coltrane, Scott describes his latest album as “a self-help book addressed to myself” that was four years in the making.

Avantdale Bowling Club’s genre isn’t easy to pin down. Typically irreverent, Scott’s Spotify profile for the project calls it “irrelevant jazz from an island nation off the coast of Antarctica.”

“The album’s about home and its inhabitants, with all their inadequacies and complexities. It’s about finding peace in the little piece of land you stand on,” he says.

Scott first emerged in 2007 with Home Brew, a band that still performs live. His other projects – Average Rap Band, @Peace, a new Average Man collaboration and his new label ‘Years Gone By’,  ensure that he continues to influence a generation of young rappers and push boundaries across genres.

“Surrounding himself with some of the best jazz musicians in the country, Tom Scott’s latest project has been recognised for its innovation and sheer brilliance. I’m thrilled we were still able to secure them for the rescheduled Wellington Jazz Festival in November this year in a completely New Zealand focused programme.”

Tickets for Avantdale Bowling Club will be on public sale from 1 September on Ticketmaster. There will be a Culture Club supporters pre-sale from 25 August, head here to join and find out more.

Further programme updates will be made in September.